Protocols of Zion–Recipe for World Domination

By admin | on September 26, 2013 | 0 Comment
Around the World By way of Deception Chutzpah! Matrix of Deception Zionism

There is an unmistakable evil in the Talmud.  The Jewish-dominated media would have you believe there is evil in Islam.  Pot calling the kettle black–at the minimum–and transference of one’s own depravity upon others (most likely).

Let’s explore a “lesson of history” which is hidden from us by the evil ones behind the destruction of Russia–and now, the process of destroying the USA.

In the transition to Jewish communism (Marxism) in Russia, one could be shot on sight if found in possession of the booklet:  PROTOCOLS OF THE LEARNED ELDERS OF ZION

The most frequent criticism of PROTOCOLS is that is a forgery.  If it is a forged document, then what is the document that is being forged?  http://www.biblebelievers.org.au/prvisit.htm#VISITING

Read the PROTOCOLS and decide if what the synagogue of satan is doing in present day is or is not a playing out of the PROTOCOLS.

Incidentally, an estimated 40-70 million Russians, many of them Christians, were ‘genocided’ by the Bolsheviks.  Why is this very high number of killings not featured in history?  Look at who were the Bolsheviks and you will know.  Who control the media and our ‘education’ [indoctrination] systems? 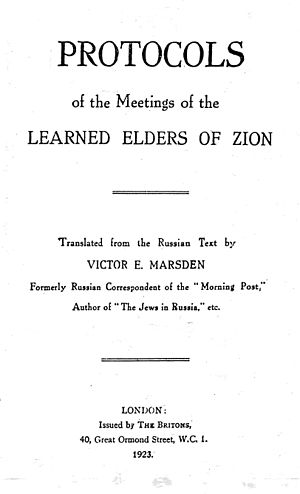