Every library must have the following excellent books about 9-11.  Click the images to order copies. 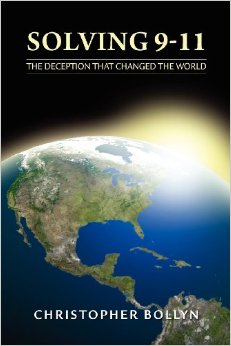 Solving 9-11 by Christopher Bollyn  An independent analysis of the events of September 11, 2001. Includes historical and geo-political background and examines the motivation of the people who played key roles in the destruction of the evidence and the obstruction of justice for the families of the victims.

Bollyn supplies in minute detail, the evidence that clearly shows how the mass murders were carried out and by whom. Islam was the perfect patsy, the perfect boogey man to rally the world. And the Zionist controlled media, was the perfect vehicle to sell it to the ignorant, brain washed masses. When those three towers collapsed, our trust and faith, our very liberties, our constitution, were turned to toxic dust right alongside them. The Patriot Act…Read more › 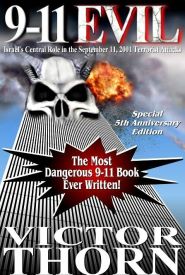 Finally, a book about 9/11 that actually talks about the real perpetrators of that bloody swindle!

Victor Thorn’s new blockbuster “9-11 Evil” bills itself as “the most dangerous 9-11 book ever written” and is exactly that, because it blows the lid off the media suppression of Jewish involvement in the greatest crime ever perpetrated against the American people.

“The attacks on New York City and Washington DC nearly five years ago were only the beginning, and if we don’t fully recognize who the real enemy is and stop it dead in its tracks right now, I guarantee that at some point in the near future, we won’t have another opportunity such as this to save ourselves.”

What does Thorn’s book do that all the other voluminous examinations of 9/11 don’t do?

It points the finger squarely at the Mossad, at Israel, and Jews in general. The crime of the century has many co-conspirators.

In this book, “Masters of Deception: Zionism, 9/11 and the War on Terror Hoax,” writer Zander C. Fuerza documents a Zionist conspiracy behind the September 11, 2001, terrorist attacks in the United States. Collecting the most potent pieces of evidence available, the author forms a cohesive narrative demonstrating that the Israeli Mossad, with the assistance of Zionist assets in the American government, conspired to execute the 9/11 attacks as a false-flag event designed to initiate the devilish neocon dream of a “Clash of Civilizations” between the Western world and the Islamic world, for the benefit of Israel and Zionism.