One big lie after another and another… 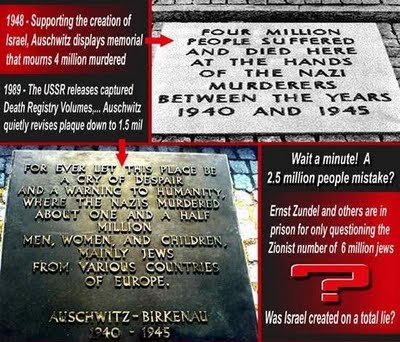 The most immediate effects of obvious BIG LIES ABOUT 9-11 are the illegal invasions, occupations, killing, destruction of cultural heritage, destruction of infrastructure in the muslim countries.  Atrocities committed by Israelis against Palestinians seem to ignore completely the lessons that Jews would have the goyim respect from their holocaust narratives.

Lies perpetrated by Jewish-dominated mass media and Jewish controlled Hollywood are so egregious as to merit further investigation into what other lies the Jews have told to further their agenda of domination and conquest.  It is logical to question the Jewish narratives of the holocaust.

Truth should not have to be protected by laws that prevent inquiry into its veracity.

Look to a courageous Jew, David Cole, who reported on the holocaust lies–then, changed his name to David Stein and went underground for about 30 years.  Cole’s interviews with Ernst Zundel and on the Donahue show (in 4 parts)–both available on YouTube.

We need not start with questioning the holocaust narratives as we have sufficient evidence of horrific lies in the official story of 9-11.  Just be prepared to realize that much of history is composed of big lies and deceptions.