Let’s meet one of the brothers who was framed:

If you look carefully at the first set of photos, showing the surveillance photo of Dzhokhar Tsarnaev and the model wearing a similar pack containing the loaded pot, both packs being slung over the right shoulder using the right strap only, you can see a dramatic difference. There are stress wrinkles under the jacket of the right image on the model, caused by the 30-lb. weight pulling downward, but Dzhokhar’s jacket can be seen to be completely smooth under the strap. His pack is clearly extremely light on his shoulder (which may be why he’s not wearing it slung over both shoulders).  As well, you can see that the weight of the pot, pulling down and outward in the model’s bag on the right, is causing a downward sloping of the top of the backpack, and is also causing many vertical stress lines on the face of the bag itself. Dzhokhar’s bag, however, is flat across the top, indicating no such downward pulling force, and it does not exhibit any downward wrinkles on its side. Whatever he is carrying, it is clearly not a 30-lb., or even a 20-lb. cylinder.

Here’s a close-up image of the shoulder straps on Dzhokhar’s and the model’s right shoulders:

Moving to Tamerlan Tsarnaev, check out the model’s slightly larger pack, which like Tamerlan’s is being worn with both straps over the shoulders. Again, the pack on the right, containing the loaded pot, is causing obvious wrinkles on the winter coat where the straps are bearing down on a small section of padded coat. Once again the weight of the straps of the shoulder— this time 15 lbs. per strap—can be seen causing prominent wrinkling on the winter coat worn by the model underneath the straps. The downward sloping of the face of the backpack, and also the vertical stress wrinkles are prominent and clearly visible also. In the video surveillance photo of Tamerlan, however, his coat can be seen to be unwrinkled under the straps, and there are again no vertical stress lines on the face of his pack. Again, it is hard to imagine a 30 or even a 20-lb. weight in the bottom of that pack. 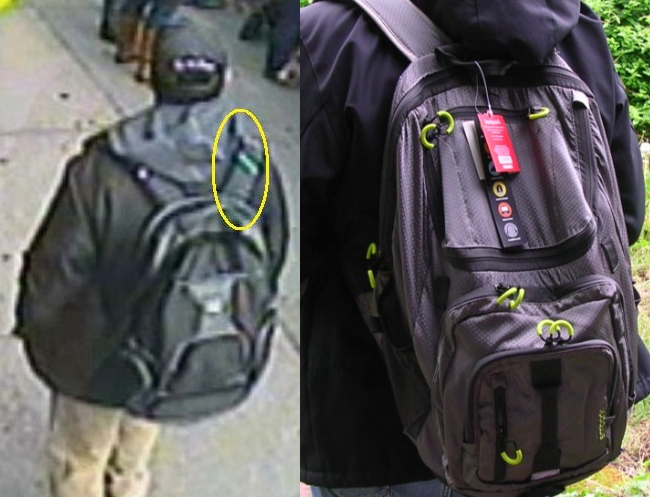 There are other questions too, that need to be asked, and that demand answers.

First of all, there is the matter of the photo released by the FBI of an exploded backpack, said to have contained one of the pressure cooker bombs. The material is dark black, and it is not because of charring, because the color is uniform, and also there are white images on it, including a white square (more on that later). That would have to have been Tamerlan’s pack, given that Dzhokhar’s is white or light-colored. But looking at the image of Tamerlan wearing his pack, and contrasting the light color of the pack relative to his clearly black winter coat, it appears that the pack is more of a gray than a black. It’s possible that it’s a matter of the lighting and the quality of the video, but it does not seem to be a jet black color, especially as there are much darker lines on it that  appear to be real black, along the seam lines. So was that exploded pack really Tamerlan’s? 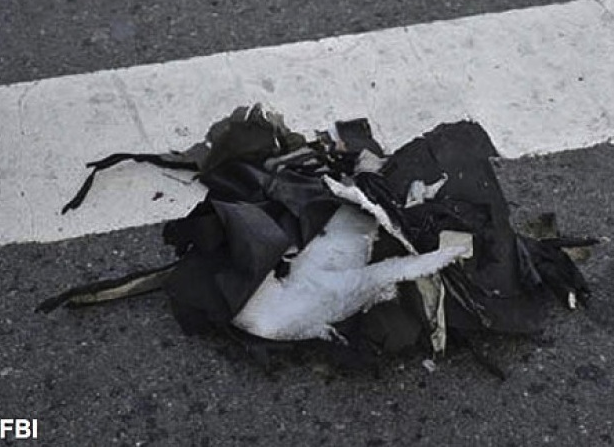 As for Dzhokhar, the photo of a pack set on the sidewalk in front of a bunch of spectators, in the spot where bomb number two exploded bears no resemblance to the pack he was photographed wearing, which had wide black seam lines and zippers. 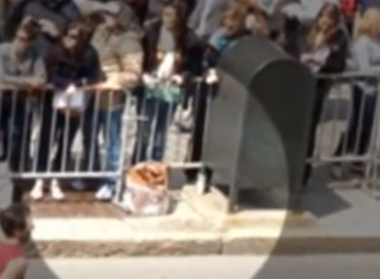 Meanwhile, there were people on the scene near the finish line who were wearing backpacks that were both very dark black and large enough and full-enough looking to be containing a loaded pressure kettle. These men were observed and photographed wearing baseball caps and shirts bearing the uniquely drawn white skull logo of a Houston, TX-based mercenary-for-hire firm called Craft International Security (whom no governmental agency will admit to having hired). Curiously, images of several of the men wearing those packs show them to have an unusual white square image on the top of the pack, quite like the white square visible in the FBI’s image of the exploded black pack. The Craft personnel’s packs are made of material that looks remarkably similar to  whatever was used to make the exploded pack. (The man on the right below is photographed before the bombing. He is also seen, in an image taken after the explosion, running alongside a second identically-dressed Craft man wearing a pack and the company’s logo-emblazoned hat. Note that the left runner, interestingly, now no longer has on his pack. Where did it go?)

Note: Stay tuned for more information on Craft, its origins, management and relationship with the US government. We will try to determine what these private “soldiers” were doing at the end point of the marathon wearing large backpacks (or mysteriously losing those large backpacks) right around the time of the explosions. Of course it’s possible there is some benign explanation. It’s equally possible they were hired to guard against some threat that runners and spectators were never cautioned about, which could explain all the secrecy now about them.