האם אתה יודע מה הכוונה “עז יהודה” ו - “אנוסים יהודי”? Pastor John Hagee is one such false preacher whose real intent is obvious to those who know the heart of Jesus Christ.

WND‘s editorial slant is clearly hate-speech directed at the allegedly ‘evil’ Islamic world–promoting stereotypes and painting muslims with a broad brush to pit Christians against muslims. גם, WND‘s efforts seem directed to create animosity and divisiveness between blacks, whites, muslims–pitting the גויים (slaves) against one another…fueling racial hatred. WND promotes attacking Iran and works to cement “אובמה, המוסלמי” canard in the minds of its flock of followers.

Which god is being thanked? G-d or God? 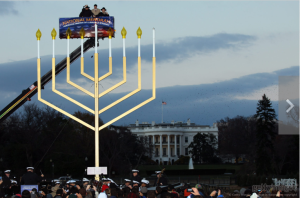 הטווח “אנוסים יהודי” could easily apply to Joe Farah who finds no fault with Israel, demonizes muslims and promotes the canard: “אובמה, המוסלמי”. Obama’s first appointment to White House Chief of Staff was Rham Emanuel whose father was a member of the Israeli terrorist organization, Irgun, and who served two years in the Israeli Defense Force. Most of Obama’s appointments to Cabinet positions are Jews. אובמה & family celebrate Seder in the White House and have a ceremony to light the National Menorah each holiday season at a time that Federal law prohibits nativity scenes on Federal property. אובמה, המוסלמי? It’s a bamboozle Joe Farah is infamous for promoting along with many other Judas goats who propagandize the gullible, believing Christians. (The writer of this page was banned from posting comments to WND for noting the previous facts.)

Efforts by Joe Farah and WND to fuel hatred and promote war are contrary to the teachings of Jesus. Farah’s deceptive style mimics the “By way of deception, thou shalt make war” motto of the Mossad. It may be argued that Farah and WND should be registered as a foreign agents of Israel–along with איפא"ק.

Here’s a sampling of the ‘news’ titles used by WND to demonstrate the pattern of demonization, hate and fueling the march to war (‘divide and conquer’) on behalf of the zionist entity: Uh oh. George Zimmerman verdict ‘means war’ / What’s this? A country OPPOSING Shariah? / Maybe doomsday is near–Bible prophecy you must know! / Does Bible warn us about ’12th Imam’? / TV station to broadcast Muslim call to prayer / You know the real and imminent threat posed by Iran / New U.S. message for Israel on attacking Iran / You won’t believe how easy it is to incite a Muslim mob / Kaboom! Now black mobs kill 4th of July / ‘Heroes’ save helpless victim from black-mob attack / School OK with egg hunt, but bans the E-word / Terror alert: Instant mayhem if Obama sets foot HERE? / Ninja angels: Is ‘The Bible’ really THIS unbiblical? / Bizarre sex games in today’s Army training / Fed-up Christians out to defeat ‘homofascism / Lesbian Mary, mother of God! / A Democrat Party official would never do THIS to “Muhammed” / Do you know the miracles of Israel? / The REAL creators of today’s Islamic terror / … מתגורר בארה"ב. warned: Terrorism coming to America / Guess where Syria’s chemical weapons originate / Revealed! Evidence Iran crossed nuclear ‘red line’ / Bone appetit! Muslims go wild in ‘demonic’ ritual / Guess which TV news network has no news on it / Dazzling video: 1 man chases away black mobs / What the devil? Is that OBAMA in ‘The Bible’? / Look who’s leading the latest war on Christians / What Obama really means by ‘election reform’ / American superstar: ‘STUPID people’ running country / Now Dems target WAGES of gun backers / CNN goes public on whether it’s liberal / ‘Stand with Rand’ takes over CPAC / Is the Tea Party Dead? Whoa! / Now schools teach kids to pleasure THIS … / Are you OK with naked boys showering with your daughter? / Pope Francis election a ‘fantastic fulfillment of prophecy’ / Holy smoke! Is this FINAL pope before Jesus? / Who’s THAT on the Temple Mount? / ANOTHER senator warns of gun confiscation / Principal can’t keep THESE Christians out of school / Who pulls America’s ‘strings?’ / Merciless killers invade U.S. over Mexico border / Woman sings to God, get tossed (literally) off train / Worried college will turn your kid into a Marxist? / It’s worse Experts: Don’t make this mistake about North Korea

Perhaps less obvious in the Judas goat crowd is Alex Jones who has amassed a fortune while putting great energy into stampeding the sheeple. His many contributions to awakening people are negated by the ease with which the mass media can discredit him entirely. Surely, the “תנועת אמת” can do better than to have Alex Jones as our leader.

Reference the above CSPAN video for the following names/comments:

נציג. Eliot Engel (D-New York) He should be removed for operating as a foreign agent on behalf of Israel. גם, misprision of treason.

Stuart Reid–Foreign Affairs Magazine Charge him with racketeering and treason.

נציג. Gene Green (D-Texas) Somebody send Rep. Green a DVD or three. He states he is not familiar with the controlled demolition of Building 7. Josh Rogin, ניוזוויק, Daily Beast, Senior Correspondent Also, please send Josh Rogin the evidence. He seems to think the question will not be answered. If he is recalcitrant, charge him with racketeering.

John Pappalardo, Popular Mechanics, Senior Editor Slick he is–“I don’t work on that…” Acting as a cover-up agent for the Zionists–and giving himself an ‘out’.

נציג. Alan Grayson (D-Florida) Very good answer to disconnect himself from criminal indictment for misprision of treason and racketeering. He says the governments documents should be “declassified” and the truth will come out. Let’s see Alan Grayson support the efforts of the 911JusticeCampaign to get those documents, כולל 80 videos of what hit the Pentagon–and bring indictments.

נציג. Scott Rigell (R-Virginia) and Bobby Scott (D-Virginia) Send these two chickens a registered letter and DVD from Architects and Engineers…Then ask them for their opinion. They evade the answer–acting like they are in service to the people. Write your own AFFIDAVIT of having informed these chickens and then suggest they are guilty of MISPRISION OF TREASON if they do not take action to investigate the crimes. Get your AFFIDAVIT notarized.

Brian Lamb (יהודי) was the founder and Chairman of CSPAN. Let’s say there is a Zionist conspiracy to cover-up the big lies of 9/11.