“Najważniejsze jest dla nas, aby znaleźć Osamę bin Ladena. It is our number one priority and we will not rest until we find him.” – George Bush (Sept 13, 2001) 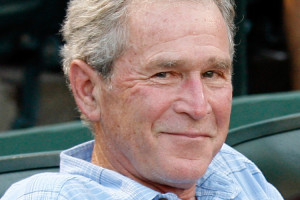 You don’t have to be a conspiracy theorist to wonder what George Bush knew…and when he knew it.

Video-Susan Lindauer: Krzak & Cheney Knew About 9/11 Months Before It Happened

Susan Lindauer was arrested under the Patriot Act after she tried to come forward and testify before the Congress about 911. The government’s answer to her offer to tell the truth was to send the FBI to her house to arrest her.

They claimed she was accepting money from Iraq. The truth was that she was sent as a CIA asset to talk to Iraq’s UN ambassador. He did buy her a cheeseburger which she ate while they ate lunch and talked. The Iraqis were helping the US to spy on Al Qaeda. In this interview she does mention that Bush, Cheney and Rumsfeld knew that the 911 attack was coming. The interview was on Russia Today so she could not say Israel did it. In an interview with Mark Glenn she did say that Dr Richard Fuisz, her control officer at the CIA, saw the nearly live feed of the planes hitting the WTC Towers sent from the Israelis. This has to be taken as an admission that Israel did 911 but it too controversial to be allowed on cable TV in the US.

Below is a video that does reveal some of those Israeli missing links the media does not want you to see.

That earlier audio interview with Mark Glenn is here:

Uwagi: Challenge people to answer just one of these questions.