Although there may well be a special place in hell for these devils, let’s give them hell by 1)indicting & arresting them, 2) interrogating them, 3) seizing their assets for participating in racketeering–cover-up of organized criminal activity per RICO statutes, 4) putting them on trial. 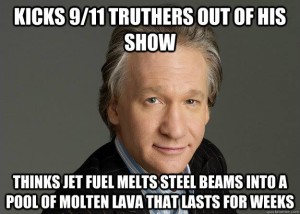 A Judas goat is a trained goat used at a slaughterhouse and in general animal herding.

Et, although Abby Martin has lifted heavy subjects into the public eye, she avoids mentioning that Bill Maher is a lackey for the psychopathic regime that controls Israel. Typical Hollywood/media whores for Israel.

Corporations are also subject to the rule of law–although recent times indicate some corporations are “above the law”. Large corporations’ assets should be seized for their racketeering in covering up 9/11 et d'autres crimes. Prosecute under RICO statutes. sRevoke their broadcasting licenses. Turn over their news agencies to university schools of journalism–and monitor the news agencies with citizens’ ombudsmen panels.

Spineless, integrity-free traitors like Scahill enjoy cashing in on terror. If you dare ask a question that goes directly to the heart of the problem (the one he’s managed to leach his entire career from) he defends his wallet and false reputation faster than Amy Goodman starts stuttering when 911 truth is mentioned.

Suffice it to say that Wolfe Blitzer should be indicted as a foreign agent within the USA mass media.

How much does being Jewish have to do with covering-up the big lies of 9-11?

“Disinformation is not unique to the right, bien sûr. Like other journalists, I have been the object of malevolent assaults from the “9/11 truthers” for not reporting their airtight case proving that the Bush administration conspired to bring about the attacks on the World Trade Center. How did they discover this conspiracy? As the independent journalist Robert Parry has written, “the truthers” threw out all the evidence of al-Qaeda’s involvement, from contemporaneous calls from hijack victims on the planes to confessions from al-Qaeda leaders both in and out of captivity that they had indeed done it. Puis, recycling some of the right’s sophistry techniques, such as using long lists of supposed evidence to overcome the lack of any real evidence, le “truthers” cherry-picked a few supposed “anomalies” to build an “inside-job” ligne de l'histoire. Fortunately, this Big Lie never took hold in the public mind. These truthers on the left, if that is where GPS can find them on the political map, are outgunned, outmatched and outshouted by the media apparatus on the right that pounds the public like drone missiles loaded with conspiracy theories and disinformation and accompanied by armadas of outright lies.”
Seize Bill Moyers’ assets and prosecute for treason and racketeering in the cover-up. Do this in memory of Helen Thomas.
Scahill’s book ‘Dirty Wars’ at Barnes And Noble–On the cover is a comment from Moyers, referring to Scahill as a ‘one man truth army.’ Birds of a feather.

Allez à 4 minute mark and listen to the end.

Indict Newt for treason and racketeering.

Smart guy who is complicit in the cover-up.

Move Sean Hannity to the front of the line to be indicted for conspiracy in the cover-up.

There must be a special place in hell…

Fareed Zakaria Fareed is editor at large of Time Magazine, and formerly held the same position at Newsweek. He is directly complicit in the refusal of those outlets in exposing uncomfortable truths.

Matt Taibbi http://www.alternet.org/story/85723/if_cheney_&_co._had_really_plotted_the_9_11_attacks_… Participating in the cover-up of mass murder, treason and crimes against humanity is punishable. Taibbi’s is a form of racketeering that is all too common among “journalists” who have abandoned their professional ethics to serve in the propaganda ministries. So-called “news” agencies whose ill-gotten assets come from criminal conspiracy to cover-up 9-11 have their assets seized per RICO (racket) statutes.
Christiane Amanpour, CNN and ABC Chief International Correspondent. Married to James Rubin, Executive Editor at Bloomberg News, considered Madeleine Albright’s ‘right hand man’ while she was Secretary of State under Clinton, Clinton’s state department chief spokesman, Wesley Clark’s foreign policy spokesman for his presidential campaign, Currently an Oxford Scholar. I don’t think Mr Rubin is Filipino.
David Gergen, CNN Senior Political Analyst and Director of Harvard Kennedy School’s Center For Public Leadership. Former Editor at large of US News And World Report. Known to have attended Bohemian Grove on numerous occasions. He has received 24 honorary degrees. To summarize, he’s a world class piece of shit.